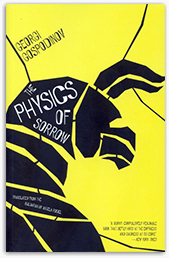 The Physics of Sorrow

The Physics of Sorrow

I are. A boy speaks from the Minotaur’s labyrinth, from a basement at the end of World War II, from a rented ground-floor room in the 1970-1980s, and an old bomb shelter tomorrow. A novel about empathy and its disappearance, about the autumn of the world, the minotaurs locked inside us, the sublime which could be anywhere, about the elementary particles of sorrow and the eternal time of childhood awaiting us. A novel of forking paths and side corridors mixing past and present, myth and document, physics and mythology for the sake of the one who shall come – a post-apocalyptic reader, god or snail.

The Physics of Sorrow was shortlisted for:

2013 National literary award for Bulgarian Novel of the Year

2012 The City of Sofia Award for Literature

About The Physics of Sorrow

As Gospodinov conceives it, the Bulgarian word tuga (which his translator, Angela Rodel, renders as “sorrow”) is, like Pamuk’s hüzün or Nabokov’s toska, a word for which there’s no real equivalent in English.

…Gospodinov’s model is Borges, whose delight in mischievous games and extravagant fantasy he shares; for all Gospodinov’s obsession with sorrow, he is a trickster at heart, and often very funny.

…Georgi’s real quest in “The Physics of Sorrow” is to find a way to live with sadness, to allow it to be a source of empathy and salutary hesitation—the antidote to aggressive politics and “market exhortations”—and not a cause of “savage fear.”

Gospodinov is one of the foremost European writers of today. There are very few novels that appear to a seasoned reader as utterly original: Fisica della malinconia is one of these rare books.

This book is madness. It is extraordinary and restless, reflective, terribly funny, jarring, as philosophical as it is poetic, microscopic and grandiose. In short: fantastic.

Both an intellectual game and a very human story, “The Physics of Sorrow” captivates.

It's the kind of enabling device that might easily have made The Physics of Sorrow a magical-realist-like family saga with dinky narratological bells and whistles attached. It could have been cute; it might certainly have sold more. But Gospodinov is playing for higher stakes than the opportunity to be the Bulgarian Jonathan Safran Foer. He's interested in the idea of a radical, trans-human empathy not for what it allows him to do in terms of storytelling, but in the way that it makes the entire world a potentially boundless repository of lived experience, a universal archive of the senses, of emotions, and of narrative. Narrative, in particular, is something for which he has a destructive appetite. He moves through his own book buying, begging, and stealing stories, spinning them out of chance encounters and tangential suggestions, filching them from the memories of those who've lived them. He's a figure of the writer as kleptomaniac, cat-burglar, and spy, constantly ravening for new materials and always unfulfilled: a Minotaur in a labyrinth of his own construction, possessed by a monstrous and lonely hunger.

Isn’t it said of Gabriel Garcia Marquez that with “One Hundred Years of Solitude” he first put Latin America on the map of world literature? Likewise, Gospodinov not only kisses realism goodbye, he also puts an experimentally playful, wittily absurd, postmodernly contradictory, self-reflexively ironic style of storytelling on the agenda. Meandering headlong, the path rises up to steep heights and descends to unfathomable depths…

(Georgi Gospodinov)... rises above the lowlands of novelistic commercialism and convention, saving not only himself, but literature as well – and with it, the entire world.

He has pulled the Bulgarian fiction out of its communist sleep.

A discovery from an unknown country… Empathy for the Minotaur: the Bulgarian Georgi Gospodinov has written a captivating novel.

Fiction in Translation: Ten Key Novels That Will Take You to Other Worlds

“The Physics of Sorrow” is a literary particle accelerator, a huge collider in which exquisite miniatures and lists mix…

This magnificent storyteller is something of a one-man-collective-intelligence.