In true Single Carrot Theatre fashion, the final show of their 7th season is emotionally evocative, confusing, dangerously inventive, loaded with conjecture, and full of wondrously stunning moments that make no sense whatsoever but make you really think.

Forcing you to think both inside and outside the box, and perhaps wonder if there is a box at all; The Apocalypse Comes at 6PM is great nourishment for your brain.

Directed with considerable momentum and nuance by Single Carrot's incoming artistic director, Genevieve de Mahy, "Apocalypse" provides an absorbing experience, for the most part, even when things are at their weirdest…

…The rest of the ensemble offers generally effective work in this strange exploration of what it means to face mortality amid the humdrum business of getting by, and how the waning light of dusk might conceal something a little apocalyptic prepared for any one of us.

“The Apocalypse Comes at 6 pm” has been staged in Sofia, 2010, and won Askeer National Award for the Best Dramatic Text of the Year. The play has been selected by the European Theatre Convention (ETC) and included in their Selection of the 120 Best Contemporary European Plays for the Stage (2010). A radio-version of “The Apocalypse Comes at 6 pm” has been produced by The Bulgarian National Radio (director Lilia Abadzhieva). The play was chosen among 300 plays for the International Theatre Festival hotINK at the LARK, New York, 2011.

In June 2014 the play had its US National premiere at Baltimore Single Carrot Theater, dir. Genevieve De Mahy, with a good critical responce.

The apocalypse is not necessarily a global catastrophe, horsemen, trumpeting angels, fire and brimstone. Sometimes the end of the world is a very personal, private and everyday thing. It comes at that hour of early autumn dusk, at that minute when the light has already gone but the darkness has not yet fallen. The stories here take place in that one long minute.

In the late October, a town is paralyzed under the threat of an invisible sniper killer. The people are hidden behind the window curtains staring at their TV’s and waiting for the latest news at 6pm. This is the preferable time for the killings too, the hour when everyone’s demons of fear and loneliness wake up, when long kept family secrets come to light; the hour of sudden revelations and revenges. Everyone could be both a killer and a victim.

This town could be anywhere in Europe. Each of its characters, migrants and natives, stands on the verge of their own darkness. One murder, or even the rumor of it, will suffice to open the gaps in the social contract. The play explores exactly this breaking point of our common existence beyond which we tend to violate the fragile armistices with the people around. The dynamite of the unshared, the untold stories and unsaid words blows up. The structure of the play is as faceted and fluid as the relationships of its characters lost in a post-dialogic world.

“I committed my first murder… when I was nine… I killed an accordion. It was a premeditated and cold-blooded killing,” says the accordionist crossing the stage in the interludes. As a certain town Homer, he recounts some micro-stories from the 1980s and the 1990s, some “small personal apocalypses” always starting with the refrain “I had some friends…” The new heroes have found a new rhapsode who relates the tragic epic of the everyday life, of the invisible people from the dark side of the public moon. “They'll only notice us if they shoot us... Or if we shoot... Our stories will only be heard under threat”.

A father, immigrant from Eastern Europe, kidnaps his own children and goes back to the place he strived to leave years ago. His wife stays in their western home which costs them exactly 12 years and one failed marriage. Just in this situation, distanced from one another, they start really talking after years of accumulated silence. While the parents straighten out their relationship through old traumas, complexes, and Plato’s dialogues, their daughter disappears.

The tragedy of a man who is always unnoticed by anyone. He leaves no memories, no traces – neither for his wife nor for the world. He could be the perfect killer.

An aged German woman dies in the hands of a foreigner (a Bulgarian woman) hired to take care of her. What do we know about the person who could be our only companion in the last, sublime moment.

And more stories, shadows and voices from behind the windows of the town. All of them bind together, sometimes through a single phrase or hint, to sketch the silhouette of a dismembered social body - vulnerable, untold, made of loneliness and unfulfillment.

Because the apocalypse is indeed a personal thing.

To the director. I imagine the performance to be driven by the tango of the sadness, by its force and its hidden energies, not by its melancholies. Piazzola’s Libertango could suggest the rhythm.

Excerpt from The Apocalypse Comes at 6 PM

Seven actors – four men, two women and one girl, who in various scenes play the roles of:

The Accordionist/Narrator (around 40)
The Watched One
A married couple around 40 years old
The Unnoticeable One
The two friends talking about a woman ( from “Six Degrees of Separation”)
The two old people (a man and a woman)
The two friends talking about weapons (from “A Very Good Average”)
The Story Collector and his assaulter (a young man around 20)
An Old Man Waiting for a Sign
An elderly lady and the woman hired to take care of her
The Sandman
Tina, the disappeared daughter (around 12)

Some actors play more than one role – various doublings (or triplings) are optional. The director is free to intensify the hinted relations between the characters. (For example the woman taking care of the elderly lady is played by the actress from the married couple.)

Dusk, the last glimmer of sunset, or rather an orange-purple stripe that cuts across the horizon (at the back of the stage). As if time were standing still in that minute when the light has already gone but darkness has not yet fallen. The stories here take place in that one long minute. The years may pass by more quickly, changing from one into another, yet the minute remains.

Dark. Voices from various points of the scene.

...I've gone through a couple of lives... But I didn't live out a single one to the end...
... They'll only notice us if they shoot us... Or if we shoot... Our stories will only be heard under threat...
...I committed my first murder when I was nine... it was just huhhh… huhhhh...
...The whole problem is that we measure it in years. 70 or 80... in the best case scenario... But it's a bit insulting... a bit insulting. It should be measured in hours and minutes...
...Loneliness and hesitation – that's what we're made of. (Silence.) God gave me some of his own depression and aggression...
...I'm so tired. I hope there's not another life after this...
...Who would perform a play without an audience? (Silence.) But I've got to live out this life without a public...
...C'mon, use your brain... There's got to be a story, we're killing a person, after all....I haven't hugged anyone in years... or been hugged... I go get massages...

...Once upon a time TV channels went off the air. How could I have forgotten? That sad sound and those white snowflakes after the national anthem... ssssssssssssssssss…
...It's already totally dark. I must admit that nights are objectively frightening. I like that word, "objectively."
...I don't leave memories. I don't leave traces.
...And anything that looks at me for more than three seconds, be it man, beast or saltshaker… for more than three seconds… can kiss its eyes goodbye.
...huhhhhhhhh....huhhhhhh.... 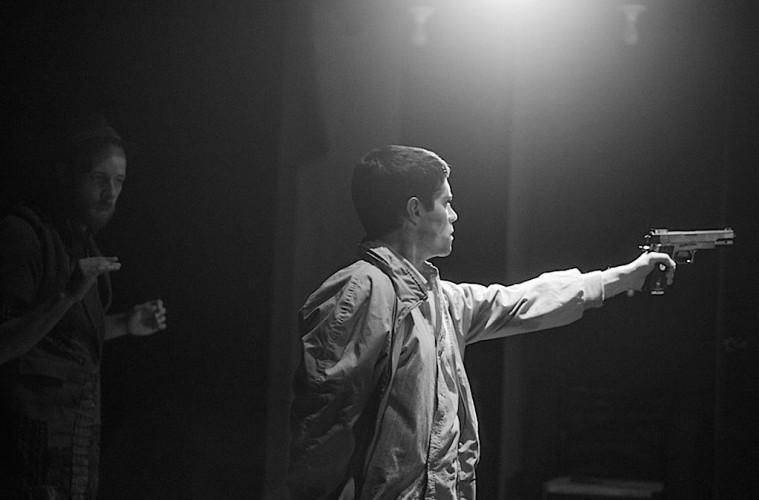